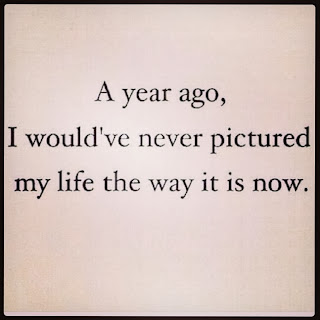 So I've been off on my days, I had no idea what day it was until I received a message wishing me, "happy anniversary...kinda!"

And then I realized it's December 29th. Today would have been my 6 year wedding anniversary! I definitely didn't forget the date, but had I not received that message, I wouldn't have gave it a thought...

It got me to thinking about the past year and all that has happened! Its been one hell of a ride, this is for sure! I had full intentions of really trying to make my marriage work, but in the end it simply wasn't meant to be. But today, I was able to look back and remember that there good times and bad, and that it was a part of my life that has brought me to where I am today!

Granted this is not where I expected to be, I couldn't imagine it any other way! Like I said, I had high hopes and plans, but changing them was a must if I was going to survive on my own.

So here's to almost 6 years, may the past make us better and not bitter.
Posted by Ashly Kay