It's Raining, It's Pouring, Grandpa John is Snoring...

Can anyone see what is wrong with this picture? :) Comment if you can find it! HINT: Look at the blurry body! 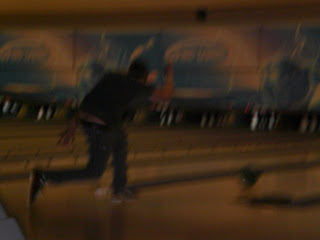 It sure is raining! Woke up this morning to find my car covered in solid ice, and almost lost my face when I slipped on the sidewalk. I wasn't happy at all! I was already running late to get Briahna to school on time, and of course I couldn't really hurry, as it was extremely icey! I started driving, the main roads seemed fine, but as soon as I enetered the village of Mackenbach, it was a whole different story. I got towards the center of town and had to turn around due to road closure. So I took the long way to school, I was pretty much driving on pure ice, as they don't plow side roads in Germany. I was coming up on a hill, I started slipping and the wheels were spinning! Yikes! I was a bit nervous, but kept going. Briahna's school sits on a hill, so as I was approaching the hill, I see a line of cars all trying to truck it up the hill. Needless to say, after 10 minutes of waiting, I asked someone if they were open (they were) but I wasn't going to slip my way up the hill just to drop her off. I turned around, and drove my ass home. And about 20 mins later, they cancelled school. 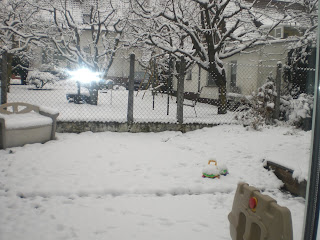 The current road conditions are BLACK. Which really means "stay home and don't drive, forget any plans you had today." They closed the gates to the base, so no one is going on or coming off. So here I am, stuck at home! :D Basically on stand-by if work decides to open today.

On a brighter note, I think Tuan's mom is coming to visit us in March! I am excited to have visitors finally! She is super excited to see Briahna! :D And I am super excited to finally travel! I am hoping to visit Paris, England, A-dam, and a few places in Germany while she is here! Yay!
Oh I forgot, Briahna when pee in the potty yesterday! it is the second time she has done it for me at home! She does it at school sometimes too, but she still isn't quite ready! I am definitely not going to force her until she is really ready. I'm not a fan of washing blankets EVERY day! 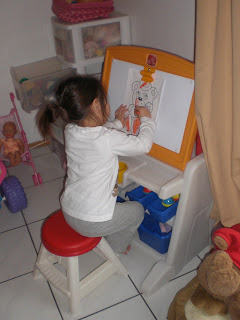 Briahna is my little artist! I bought her a small art desk after Christmas! she loves it! She loves drawing pictures for Nana and Granpa! She is also a fan of painting and playdough! Soon I'll get her into some more advance artsy stuff, but for now, I'll stick to the crayons! She tends to make a big ol' mess that this mama doesn't like to clean! :D 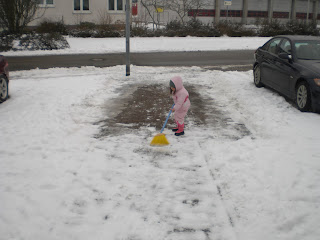 NO! We don't make her sweep the driveway! That keeps her occupied while we shovel the driveway! And speaking of that, I wonder how I went 21 years in Minnesota without hardly ever shoveling! Shoveling is some haaard work! 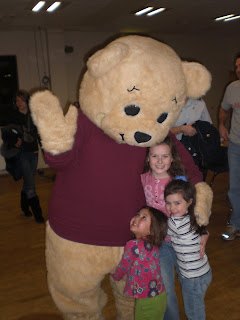 A friend of mine invited Briahna and I to join them to a family night on base. This was their version of Winnie the Pooh, and I am going to spare the laughter and not even post a picture of Tiger. It was more of a yellow cat with stripesn and I have a feeling the whomever was inside, was a bit naughting! They were swining their tail and pokin the kids with it...with the tail between the legs, yes very inappropriate for the little ones! Quite hillarious though! Briahna was exstatic though! She played catch with them and danced! She is such a friendly little girL!
Posted by Ashly Kay 1 comment:

SO sorry for the absence...

Well I believe the last time I wrote was in October! So sorry I haven't had any updates! So here is a quick summary: 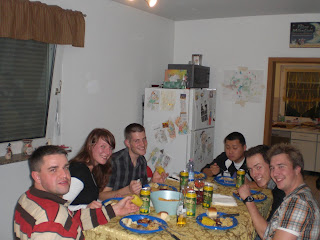 November:
This month was spent being much more busy than any other month yet! Briahna started pre-school at a school in Germany. She attends 2 days a week from 9a-3p. She absolutely loves it! She has learned so much in the short time she has been there! I was offered a job at the Service Credit Union on base. Tuan was busy working, driving, and hanging out! We had Thanksgiving over at our house with some of Tuan's foreign friends. We wanted to show them a typical American Thanksgiving. They seemed to definitately enjoy the food, however they don't eatlike Americans. 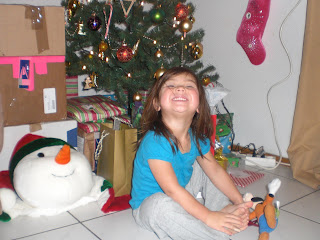 December:
I was so excited for the holidays, but this year, I had seemed to be extremely home-sick. I missed home more than ever! We made it though, we celebrated Christmas Eve at home with just the 3 of us, and had friends over for dinner on Christmas Day. The kiddos had a good time and Briahna was spoiled as always. Just want to thank everyone who send cards/gifts this year! We always love a little something from home! I started working at the Credit Union at the beginning of the month, and it seems to be going okay. Hm, Tuan and I babysat a few kids, and I was hoping it would cure his desire for another baby...but did that blow up in my face or what! That just made him want MORE! :D Sooner than later I guess! Anyways, It was another busy month with work, school, and such! Tuan and I spent NYE together, didn't do anything special, but had some time without Briahna! She is such a joy, but sure can be busy!! :D Tuan had 2 free weeks of leave, he got to catch up on his quality time with briahna while I was busy training at work! 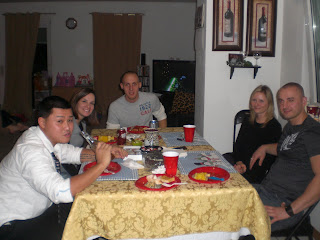 As I was uploading pictures, I totally forgot about some things we did in december! Briahna had her first school program, her class sand Rudolph! It was too cute! :D We attened Tuan's holiday party for NATO. Needless to say, we were about the only American's there. There were families from the UK, Germany, Czech, and Belgium. It's pretty cool to meet people from other countries. 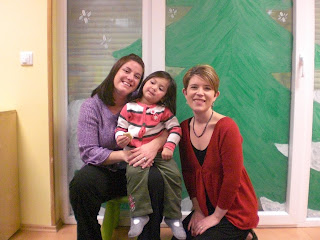 On with the new year:
January 2010:
Last year was good, let's hope 2010 is better! We started off the year with the same old stuff, work, school, and Briahna! We have a coupld trips planned in the next coming months, a trip to Garmish (An army resort in the Alps) and hopefully a trip to Paris, England, and A-dam! That's all I ask :D. 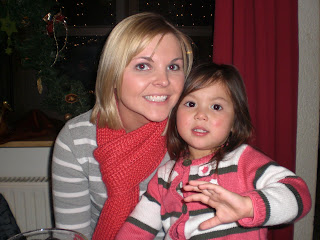 Recently I have been thinking about how absolutley blessed we are. We have more than most people could ask for. I can't help but think about the terrible things going on in the world today. I am so blessed we are where we are. I pray that everyone stay's safe, healthy, and happy! I hope that those dealing with tragedy, illness, and any other unfortunate events can find happiness and know that in the end, things will be okay. All we can do is live each daY to it's fullest and strive for excellence in all that we do!
And that's about as much as I have to say for now, I will do my best to keep updates coming more frequently! Thanks to those who read and continue to check for updates! :D
Posted by Ashly Kay No comments:

Newer Posts Older Posts Home
Subscribe to: Posts (Atom)
"Nobody can go back and start a new beginning, but anyone can start today and make a new ending." -Maria Robinson