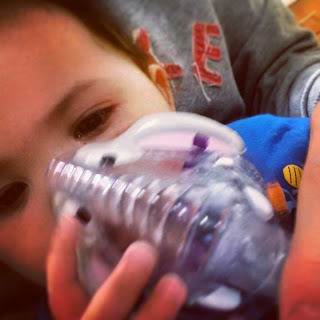 My poor baby had his first experience with a nebulizer in the ER tonight. :(

I had noticed he was having labored breathing and wheezing and decided to get him checked out. I always hate going to the ER, but on a Sunday night, it was my only option.

So the first Dr. could definitely tell by his wheezing that he needed a nebulizer. Linc did great! They tested for RSV and Strep and both were negative. Whew! The Dr. had shift change so then we had a second Dr. He didn't seem concerned about the rapid breathing or retraction in his chest.

By the time we left, the wheezing stopped, O2 stats were good, two scripts for a nebulizer and prednisone, no diagnosis, and i had a sleeping baby.

I'm not a Dr. by any means, but I guess for a parent everything is worrisome. Linc is still having rapid breathing with retraction in his chest. (Retraction is when he inhaled, part of his chest retracts inward instead of rising ) If the Dr. Wasn't worried, then do I take that as everything is okay? I guess when breathing patterns aren't normal, it's a red flag that something is going on.

But on a Sunday night, all I can do is monitor him and pray he heals up quickly.
Posted by Ashly Kay